Displacement and Neglect Aggravate the Tragedy of Women with Disabilities 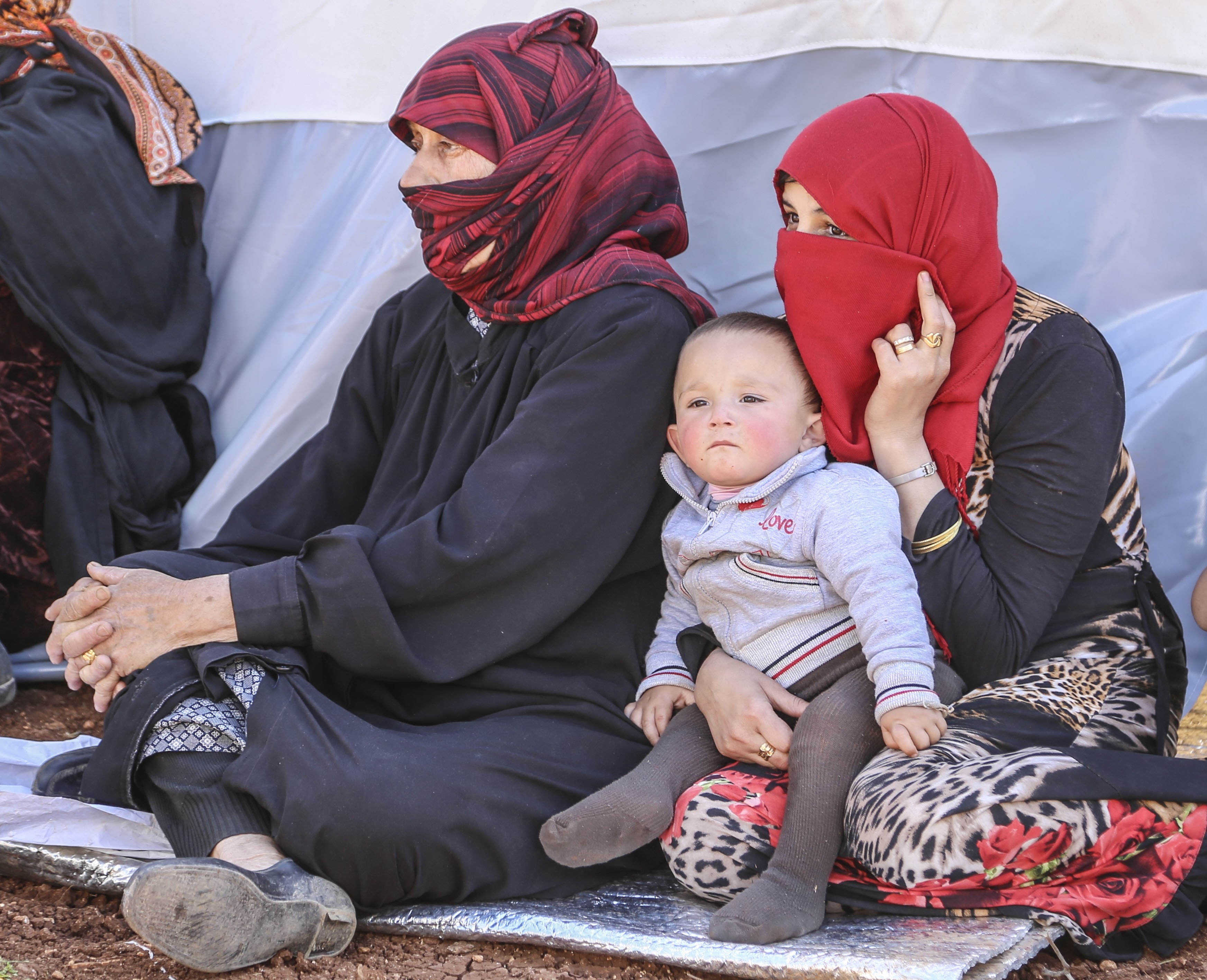 Displacement and Neglect Aggravate the Tragedy of Women with Disabilities
Farhat Ahmed – Jaber Oweid
Um Musa (60-year-old) carries a plastic jug and accompanies one of her daughters with a genetic disease to a toilet nearby her tent. The toilet is a large piece of cloth attached by two nails, with no ceiling or walls or seat. Then she returns to accompany another one of her four daughters who had lost speech because of a disease that also weighed down their movements.
“Wafdiyyah” Um Musa from Al-Sayyadi village in the eastern countryside of Ma’rat Al-Numan, was displaced to “Al-Mansour” camp near Al-Burdagali village, north of Idlib, accompanied by her four daughters and a fifth son also with a disability, after the regime forces advanced to the area in early 2018 and took control of dozens of villages and towns there.
Um Musa says that the displacement has aggravated her tragedy and that of her daughters. The tent she obtained does not shield from the rain or the cold, and the roads are not paved so when it rains it gets muddy, and the suffering increases with the mud because the movement becomes harder even between the tent and the cloth toilet.
“Sometimes, I have to carry one of them to the toilet,” adds Um Musa, indicating that she cannot leave them alone even for a few moments, as they might get lost. If they moved away from the tent, they cannot return. My time is divided between the girls and their sick brother, and we have no breadwinners; we depend on the assistance provided to the displaced people.
As for the services provided, Um Musa says they are insufficient as her daughters need treatment and special requirements and none of this is available. In addition, the presence of a wheelchair and an equipped toilet
may reduce her suffering and that of the girls. It is something she has demanded dozens of times, she says, but received no response.
Um Musa’s displacement story does not differ much from the stories of other Syrians, but her suffering increased by the presence of five people with disabilities accompanying her. She confirms that the bombing that destroyed her house in the village led to the escape of the four girls, who fell into a nearby hole, so she pulled them out and the displacement march began by carrying them in rotation to a nearby village called Al-Saqia.
Abdel-Karim Abu Hammoud, the director of the camp in which Um Musa lives, affirms that the situation is tragic. There are no equipped tents, no roads and no private toilets, despite repeated requests to humanitarian organizations, but there was no response, he said.
Abu Hammoud indicates that there are more than 125 families in his camp, including 13 people with disabilities, 8 females and 5 males.
Sumaya Muhammad Shihan (47-year-old) is from Al-Sharia town in Sahel Al-Ghab in Hama countryside. She is the breadwinner of four children, the oldest of whom is 14. One of her legs was severed during the bombing of the regime forces, and she lost the ability to move the other in the same bombing. Sumaya lives in Al-Siddiq camp near Atma, in the north of Idlib. The organizations’ neglect has forced her to invent a “crawler” that helps her to move inside the tent.
Sumaya says she has not left the tent for more than a year due to the unavailability of a wheelchair, and because of the diseases that have accumulated in her body due to the lack of movement. What prevents her from going out as well is that pits surround her tent.
Sumaya was shot by a DSHK machine gun belonging to the regime forces at “Tal-Othman” checkpoint northwest of Hama seven years ago. She was on her way to buy socks and petrol from the city of Hama, in order to sell them and support her children. Her left leg was immediately severed and she was transferred to Turkey for treatment.

Sumaya says: “the doctors tried to connect the tendons and nerves that were cut, but to no avail. I was paralyzed and became crippled and I cannot stand since that day. During the military campaign that was last launched by the regime forces in Hama countryside, and after they took control of the town, we fled to the northern countryside of Idlib and we settled in this camp.”
Sumaya confirms that she turned to many parties concerned with camp affairs, and that she demanded a wheelchair and an equipped toilet for people with disabilities, but they were all void promises.
The tragic situation experienced by the daughters of Um Musa and Sumaya reflects only a small part of the suffering that women with disabilities experience in the camps that are estimated at hundreds, spreading on the border strip with Turkey between the Afrin region in Aleppo countryside and Darkoush, northwest of Idlib.
In a report issued in November this year, The Opposition’s “Assistance Coordination Unit” estimated the number of people with disabilities in the camps of Idlib Governorate at approximately 1,783 people. However, these numbers remain inaccurate due to the difficulty of reaching all cases, and due to the ban imposed on most of those camps by the “Camps Administration” of the “Salvation Government”, which is considered the political wing of the Levant Liberation Committee.