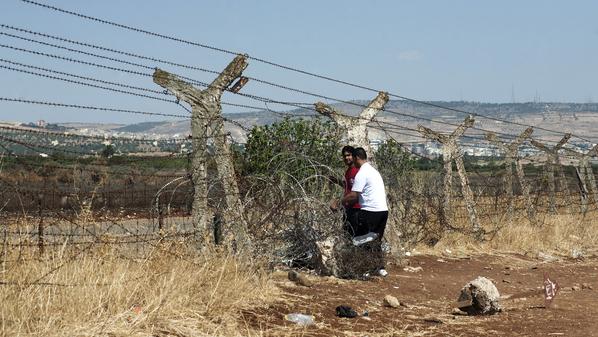 TO GO WITH AFP STORY BY MICHEL MOUTOT
Syrian civilians attempt to cross illegally to Turkey through a fence on the Syrian-Turkish border on September 11, 2012. The Between the olive trees and the barbed wire on the Syria-Turkey border, fleeing Syrians play a daily game of cat and mouse with Turkish troops that sometimes threatens to lead to confrontation. The Turkish position is clear — only Syrians with passports can cross. AFP PHOTO/ACHILLEAS ZAVALLIS (Photo credit should read ACHILLEAS ZAVALLIS/AFP/GettyImages)